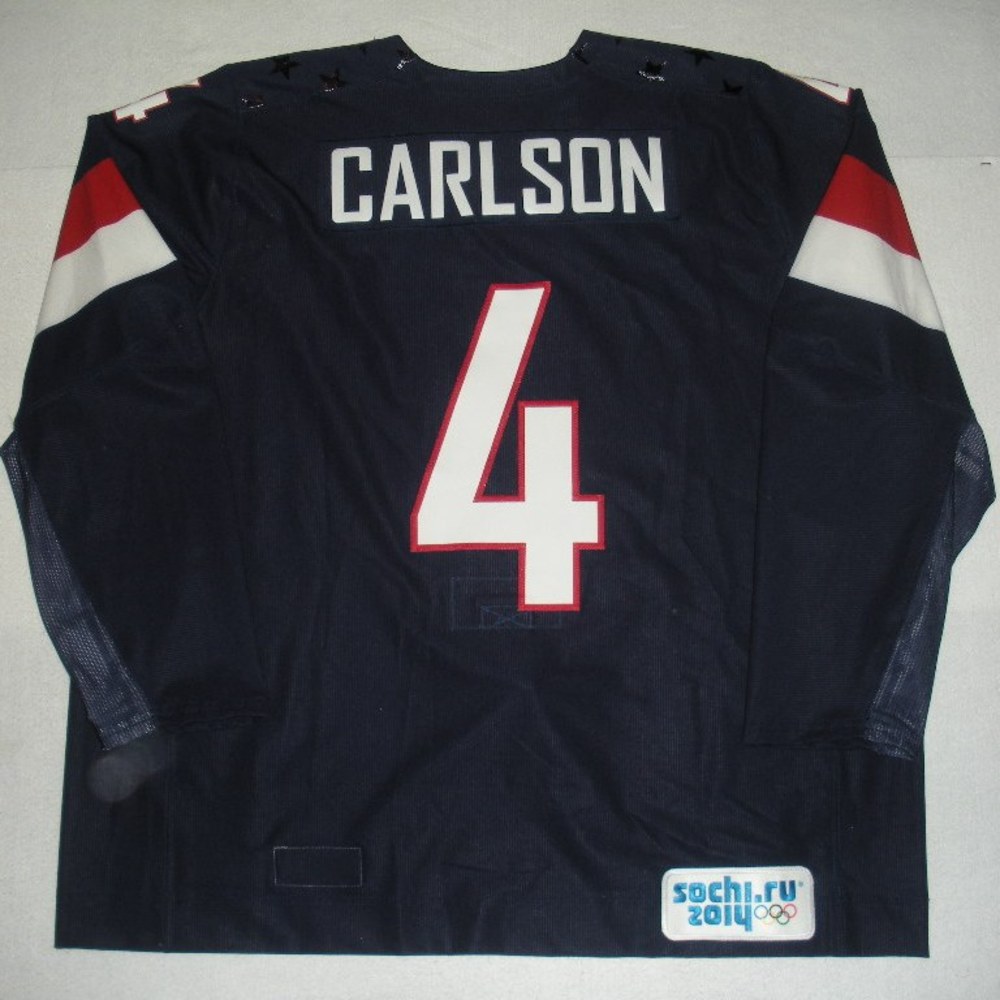 USA Hockey and MeiGray, "The Official Game-Worn Source of USA Hockey" have teamed so that fans across the globe can own a piece of Team USA from Sochi 2014. The Olympic Winter Games were held in Sochi, Russia from February 7, 2014 through February 23, 2014.

The USA Hockey-MeiGray Group Game-Worn Authentication Program is proud to offer fans and collectors across the globe the opportunity to own a piece of history ... the set of blue jerseys worn during the second period, third period, overtime and shootout of Team USA's 3-2 victory over Russia in the preliminary round on February 15, 2014 at Bolshoy Ice Dome in Sochi.

There were two sets of blue jerseys manufactured by Nike and prepared for use by the 2014 U.S. Olympic Men's Team vs. Russia on February 15, 2014. Each jersey was bar-coded before the tournament. The sets of jerseys were collected after each game by Team USA's equipment staff. Each jersey offered in auction has been security-tagged with an individually serial-numbered USA Hockey-MeiGray Authentication Program inventory tag.

This auction is for the actual blue jersey worn by #4, John Carlson, during the second period, third period, overtime and shootout.

Carlson wore this jersey during the second period, third period, overtime and shootout of the United States' 3-2 shootout victory over Russia.

This jersey, a Size 62, has been registered in the USA Hockey-MeiGray Game-Worn Authentication Program as number USA09118.

Team USA's Silver-Medal Winning Women's team wore two sets of jerseys in the Olympic Games, one white and one blue. The women were presented with their white jerseys after the tournament. The one set of blue jerseys, worn in Team USA's 3-1 victory over Finland, 9-0 victory over Switzerland, and 6-1 Medal Round victory over Sweden are now up for bid by USA Hockey-MGG.

The USA Hockey Foundation is a charitable and educational non-profit corporation that provides long-range financial support for USA Hockey and promotes the growth of hockey in the United States.

The Foundation's primary goals are to enhance USA Hockey's mission and activities; to provide funding for education and training of high performance athletes; and to provide opportunities for greater participation throughout the country.

If your country is not listed, contact us PRIOR TO BIDDING for an exact shipping quote.

Shipping costs for this item are:

All winning bidders pay shipping charges and are responsible for all tariffs, taxes, duties and any other additional costs associated with shipping inside or outside of North America.

In an Open Auction, buyers bid until the auction ends. The item is then sold to the highest bidder at the end of the auction period. There is no reserve price in an Open auction. The seller must sell the item to the highest bidder. Bidding can start as low as the Opening Value (minimum price or starting amount) of the auction. Once the auction closes, email notification providing contact information is sent to the buyer and seller automatically so that arrangements for payment and shipment of the item can be determined.

Tell a friend about this auction. Enter their email address below:

What is Auto Bid Extend?

The Auto Bid Extend feature ensures that bidders will always have a chance to challenge bids placed in the final seconds of an auction. When indicated on a listing page, if a bid is placed during the last 5 minutes of an auction, the auction will automatically extend for an additional 5 minutes from the time of the latest bid. The auction will close once all bidding activity has stopped for a period of 5 minutes.

...the current bid has exceeded the buy now price for this item, so buy now is no longer available.

Text Bidding has been added to NHL auction in order for you to bid wherever and whenever you'd like directly from your phone. This new feature allows you to place bids, receive bidding notifications, and confirmation notifications directly by text. In order to use this new feature please remember to opt-in within the Text Bidding section of your account to the terms and conditions as well as have your credit card on file.

This listing is eligible for Text Bidding.